In breeding puppies, our aim is to produce “quality” dogs.
For this we carefully choose the stallions that we mate with our females.
You will tell me that this is nothing new, but this is what should dictate the behaviour of any serious breeder !

Why become a breeder ?

You don’t become a breeder after one litter… or because you have several female reproducers, you become one with time. If nothing replaces experience, it is however undeniable that such an activity requires knowledge in many fields such as installations (surface, layout, location…), feeding (management of rations, adaptation according to the activity…), reproduction (follow-up, pathology, genetics, choice of breeders…), hygiene (prophylaxis, parasitism…), health (care, diseases…) and legislation (sale, management, various declarations…)

The certificate of competence, a document granted by the authorities, attests not only to the candidate’s knowledge but also to the conformity of his installations.

We only produce puppies that will be registered in the French stud book (LOF), LOF Rottweilers.

Before producing to sell, we produce for ourselves, to find the puppy or puppies that will ensure the succession of the kennel, make it progress, that will allow us to obtain the best results in shows but also and especially on the working rings.

After having been a user of dogs produced by other breeders, both German and French, my ambition is to produce and “take out at high level” Rotts from La Vallée des Glaciers.

Even if genetics is not an exact science, that the production of balanced, healthy, beautiful and good puppies depends on many environmental and genetic factors, we strive to satisfy our customers by offering them the puppy that suits them best. We breed few litters and each puppy we place is an ambassador of our kennel, which is why we attach great importance to the choice of the future owner of our puppies. We do not produce merchandise, but living beings whose well-being is important to us. We commit ourselves to follow the dogs that we give birth to throughout their lives. If there is a problem or if the dog does not meet the expectations of the owners (which can happen), we will take the dog back or help the owners to find a new home for the animal. It is important for everyone to know that in such a case, we will do everything to find a solution to avoid the worst 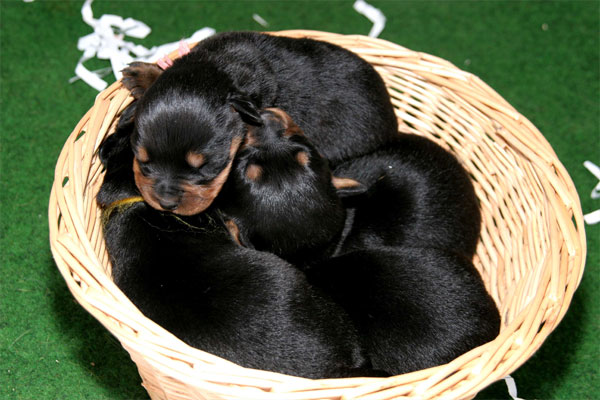 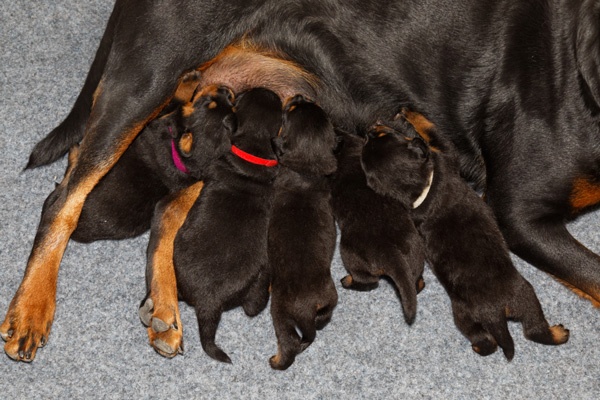 We mainly use German stallions (ADRK).

The German selection is for us a guarantee of quality. Indeed, in the country of origin of the Rottweiler, the criteria authorizing a dog to reproduce are much more serious than in France. While a simple confirmation allows a French dog to produce puppies with a pedigree (Lof), in Germany it is necessary to obtain a BH as well as a ZTP. These two tests not only ensure that the dog is conforms to the standard, but also that it is balanced, stable and has the ability to work in biting trials… The Rottweiler’s abilities as a working dog are thus preserved.

Genetics, but not only...

The choice of the stallion is made according to the morphological qualities sought, but also and above all according to his aptitude for use, his balance, his pedigree and his complementarity with the dam of the future litter. To all this we add a small part of “coup de coeur” and we expect that from this mixture comes a Champion.
Taking into account, of course, the main thing, that is to say that according to the laws of genetics it is undeniable that the puppies recover 50% of the genetic potential of the father and 50% of that of the mother without forgetting a fundamental element in a breeding aiming at producing balanced, sociable and healthy dogs: the influence of the mother (too often neglected).

If from a genetic point of view, the stallion and the bitch should be given the same importance, from a qualitative point of view, the action of the bitch is very clearly dominant, both from a physical and behavioural point of view. Indeed, her health, her physical condition, her activity, her psychological balance… are all points that condition the physical and behavioural development of the puppies.
During gestation, then as soon as she gives birth and finally during the first contacts with the environment, the bitch acts directly or indirectly on her puppies, the angers, the diseases, the stress of the bitch are perceived by the foetus and then by the puppy, they are part of her living environment.
The door slamming, the horn in the street… are perceived with indifference by the puppies of a confident bitch but with fear by the puppies whose mother is in doubt.

The action of the bitch on her litter thus goes far beyond the genetic aspect of reproduction. She transmits the first knowledge, she carries out the first learning, she conditions the behavioural capacities of the puppies’ future, thus their utilitarian aptitudes, and this, in an indelible way.
The value of the working dog, balanced, courageous and sociable, is first of all that of its mother, well integrated into the environment created by the breeder, prepared and I would even go so far as to say trained in the ring, IGP, or any other discipline. Before looking for a stallion, it is essential to work the bitches. 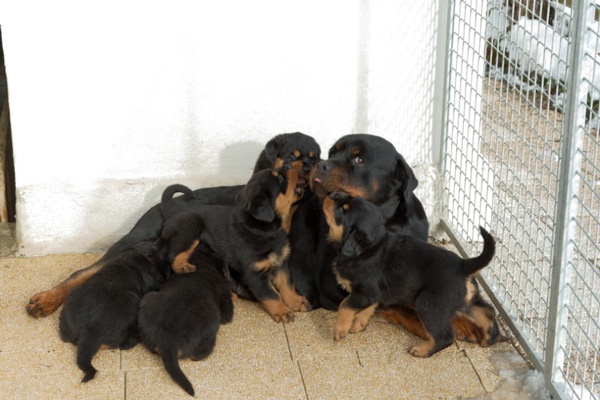 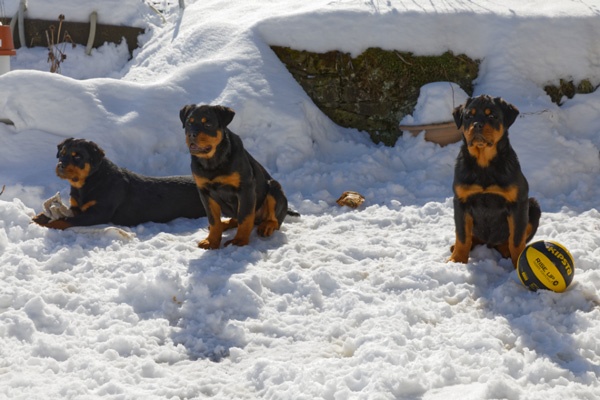 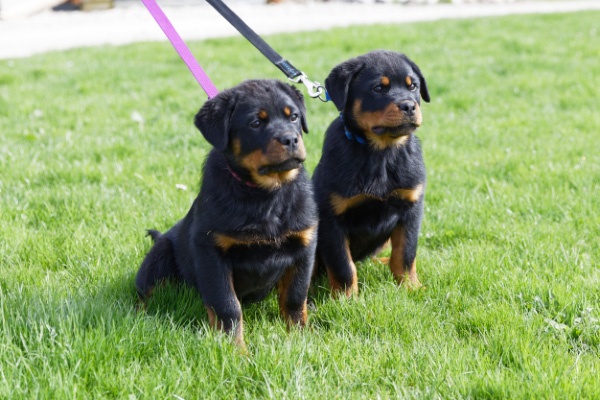 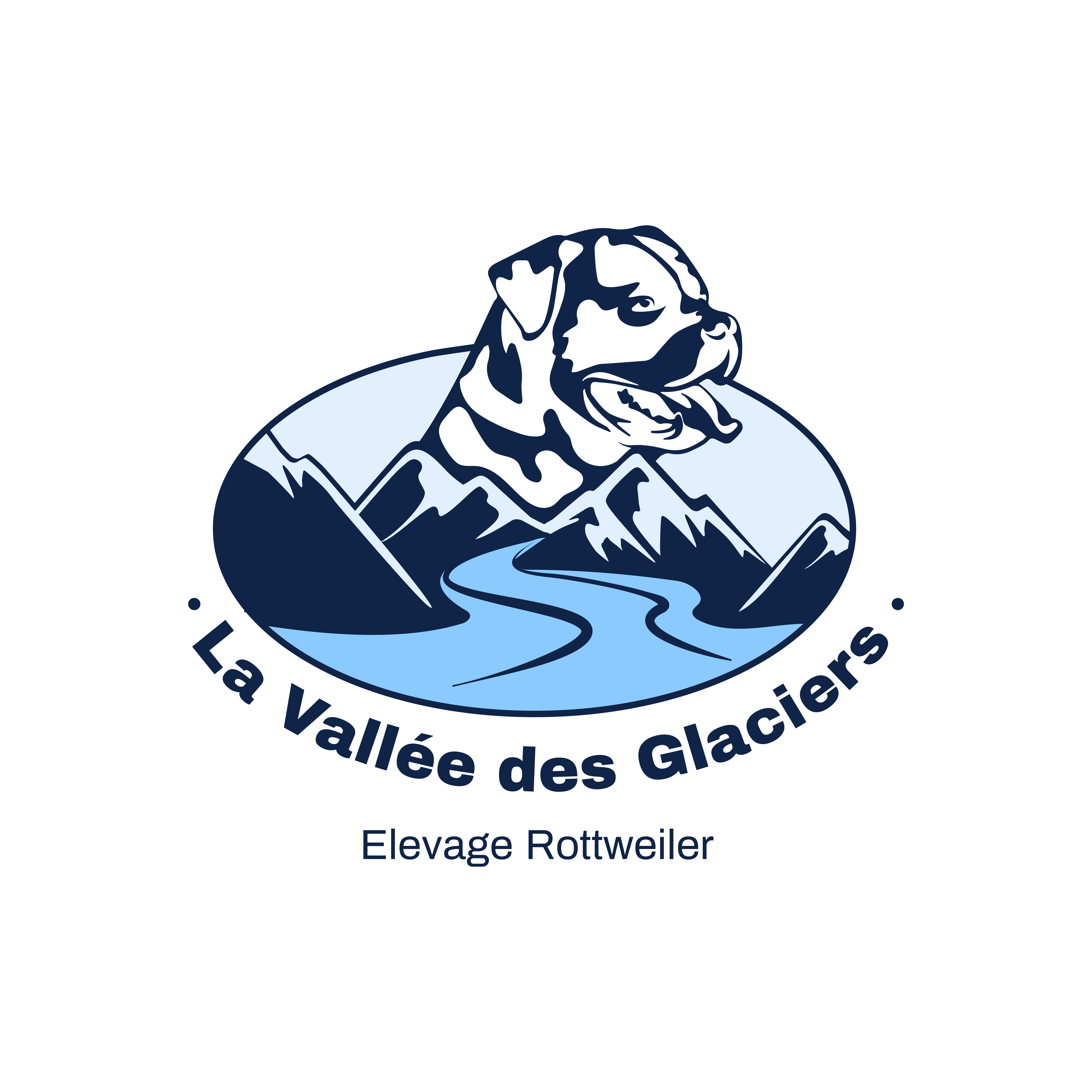